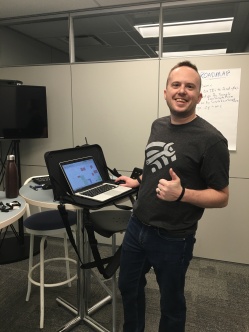 I have been building IP networks for a little over a decade in the metropolis of Saskatchewan, Canada. There aren’t a lot of network engineers around here, so that means I’m typically into a little bit of everything – route/switch, security, data centre, and wireless. Voice and I separated amicably a few years back; it wasn’t me, it was them.

After nearly two years of banging my head against a four post rack, I became CCIE #50782 (routing and switching) in 2015 and since then I’ve been thinking maybe I’d like wireless and I to be more than just friends with benefits. It’s been fun, but I’m ready to grow up and delve beneath Wi-fi’s pretty face; and accept the complex physical layers and personality quirks for better and to leave for worse behind. In September of 2016, I became CWNE #190, but there is a lot left to learn.

I’m going to find out what Wi-fi looks like before that first cup of coffee.